Stars of the film 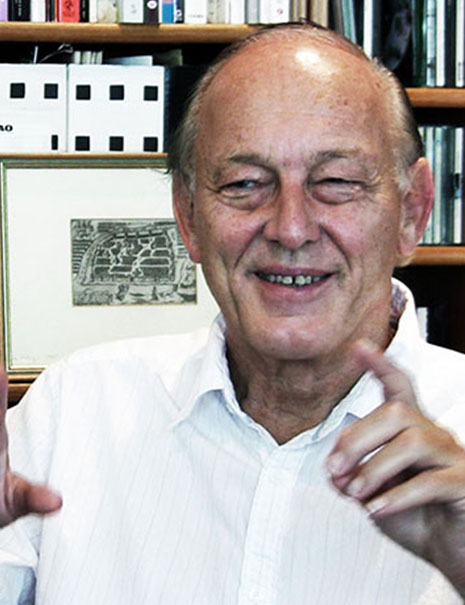 Canadian economist and professor of economics at the University of Ottawa. He is also Director of the Centre for Research of Globalization.

Prof. Chossudovsky acted as economic adviser to governments of developing countries and has worked as a consultant for international organizations including the UN Development Programme, the African Development Bank, the UN African Institute for Economic Development and Planning, the UN Population Fund, the International Labour Organization, the World Health Organisation, the UN Economic Commission for Latin America and the Caribbean.

Economist - Canadian economist and professor of economics at the University of Ottawa. He is also Director of the Centre for Research of Globalization.Read More

American economist and author, best known for his book “Confessions of an Economic Hit Man” (2004), an insider’s account of the exploitation or neo-colonization of Third World countries by what Perkins describes as a cabal of corporations, banks, and the United States government.

His 2007 book, The Secret History of the American Empire, provides more evidence of the negative impact of global corporations on the economies and ecologies of poor countries, as well as offering suggestions for making corporations behave more like good citizens.

Author - American economist and author, best known for his book “Confessions of an Economic Hit Man” (2004), an insider’s account of the exploitation or...Read More

Professor of military history and land warfare at American Military University, where he also teaches peacekeeping.

He is also the author of the UNITAR training program for peacekeeping in the Balkans and is currently revising the
UNITAR program on the modern history of peacekeeping. A former Canadian soldier, he holds a UN Global Citizen Award for furthering awareness of peace and peacekeeping.

Professor of military history - Canadian economist and professor of economics at the University of Ottawa. He is also Director of the Centre for Research of Globalization.Read More

Former Canadian diplomat. He was High Commissioner to Trinidad and Tobago and later Ambassador Extraordinary and Plenipotentiary to Yugoslavia, Albania (1990-1992), and Bulgaria.

He worked for the Departments of Citizenship and Immigration and Foreign Affairs and was later appointed the head of the Immigration Foreign services. Amb. Bissett also served as Canadian High Commission in London, England, and later became he assistant undersecretary of state for social affairs in the Department of External Affairs.

His coverage has included wars in Cambodia, Africa, the Balkans, and Iraq. Taylor is a former private in the Canadian Forces, and is now the editor and publisher of Esprit de Corps military magazine. In his book “Inat: Images of Serbia and the Kosovo Conflict” he argues that NATO involvement in that conflict was unnecessary and that Western media coverage of the conflict was biased against the Serbs.

He established and commanded Sector Sarajevo as part of the United Nations Protection Force UNPROFOR in Yugoslavia in 1992. Using the media as a means of trying to help restore peace, MacKenzie became well-known worldwide. He is a recipient of the Vimy Award, which recognizes a Canadian who has made a significant and outstanding contribution to the defence and security of their nation and the preservation of democratic values. In 2006, he was made a Member of the Order of Canada.

After the victory of the DOS in the 2000 presidential elections in Serbia, he was named the Minister of Culture in the government of the late Zoran Djindjic. He later founded the “Moja Srbija” (My Serbia) movement, taking part in Serbian elections in 2008.

In early 2010 he and his party merged into the Christian Democratic Party of Serbia.

Serbian actor and politician - After the victory of the DOS in the 2000 presidential elections in Serbia, he was named the Minister of Culture in the government of the late Zoran Djindjic.Read More 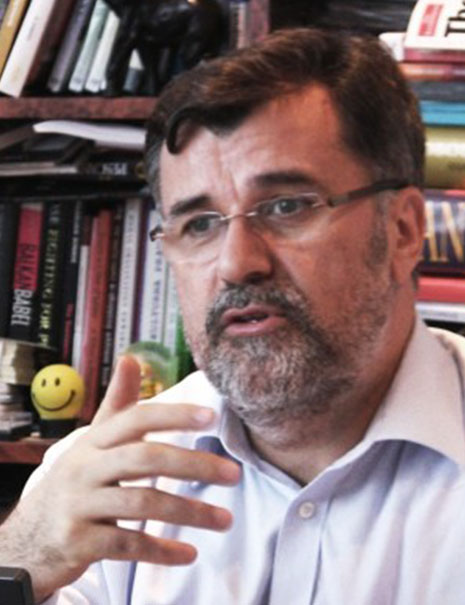 Chief Executive Officer and one of the founders of B92, a Serbian broadcaster with national coverage headquartered in Belgrade.

At the World Economic Forum’s Annual Meeting in 1999, he was proclaimed one of the year’s top 100 Global Leaders for Tomorrow, along with Veton Surroi, the publisher of Koha Ditore, a daily newspaper in Kosovo, Serbia.

Retired Serbian basketball player (played in the NBA) also well known as a great humanitarian, helping children in his native country of Serbia, as well as in Africa.

In late 2007 Divac has founded a humanitarian organization, “You Can Too”, with the goal of assisting refugees in Serbia.
In 2008, Divac was appointed as a government adviser in Serbia for humanitarian issues. Divac appears in the ESPN 30 for 30 documentary “Once Brothers”, where he discusses the exploits of the Yugoslavia national basketball team in the late 1980s and early 1990s and how the Yugoslav Wars tore them apart.

Award-winning, internationally known American political scientist, historian, and culture critic who has been writing on a wide range of both scholarly and popular subjects for over forty years.

He has taught at several universities and colleges and has been a frequent guest lecturer before campus and community audiences. In addition, he has played an activist role in political struggles, most notably various anti-war movements. Included among the subjects he addresses are American politics, Yugoslav and Balkan affairs, news and entertainment media, ideology, historiography, ethnicity, and religion. 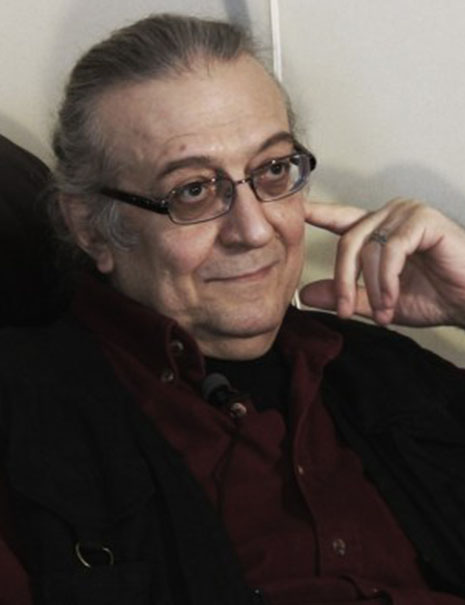 Professor of sociology at Ryerson University, before he passed away in October 2010.

He obtained his B.A. and M.A. at the University of Zagreb (Croatia) and his Ph.D. at the University of Toronto. He taught sociology and anthropology in Croatia and Canada for almost thirty years. Dr. Drakulic published extensively in the areas of social movements, education, urban guerrillas, nationalism and war. His most recent publications included an article on nationalism in Croatia (past and present).

American author of “Strange Liberators: Militarism, Mayhem, and the Pursuit of Profit”.

He is on the Board of Directors of the Jasenovac Research Institute and on the Advisory Board of the Korea Truth Commission. His articles have appeared in newspapers and periodicals across the world, including the U.S., Canada, South Korea, Great Britain, France, Zimbabwe, Yugoslavia, Russia, Denmark, and Australia.

American film director of “Yugoslavia: The Avoidable War” (2002), a 165 minute documentary which was broadcast on European and Canadian television with a well reviewed (NY Times, Chicago Tribune) and theatrical release in selected cities in the US.

He is also a film and video producer for GB communications and media consultant for Serafin Associates.

Kenney resigned his commission in 1991 over US policy towards the Yugoslav conflict. He had about 60 articles published in mainstream outlets, did hundreds of radio and TV interviews and talk shows, and traveled extensively through the US on speaking tours.

American author of “Strange Liberators: Militarism, Mayhem, and the Pursuit of Profit”.

He is on the Board of Directors of the Jasenovac Research Institute and on the Advisory Board of the Korea Truth Commission. His articles have appeared in newspapers and periodicals across the world, including the U.S., Canada, South Korea, Great Britain, France, Zimbabwe, Yugoslavia, Russia, Denmark, and Australia.

During 2003 he was writing a column for Glas Javnosti daily newspaper. He is also one of the founders and a CEO of “Magmedia” company for protection and exploitation of intellectual property. In 2010, he sang in front of a 10,000 strong crowd at the “Family Walk” rally organized by “Dveri” in Belgrade.

Serbian academic and politician, and the former Minister for Kosovo and Metohija in the Government of Serbia.

He was also the advisor for political issues to former Yugoslav president and Serbian Prime Minister Vojislav Kostunica.

He headed the Serbian government’s Committee for Decentralization and was coordinator of Serbia’s State Negotiating Team of the future status of Kosovo.

He was never a member of any political party, neither the Communist Party, nor Milosevic’ Socialist Party, even while Trajkovic was advising the President. 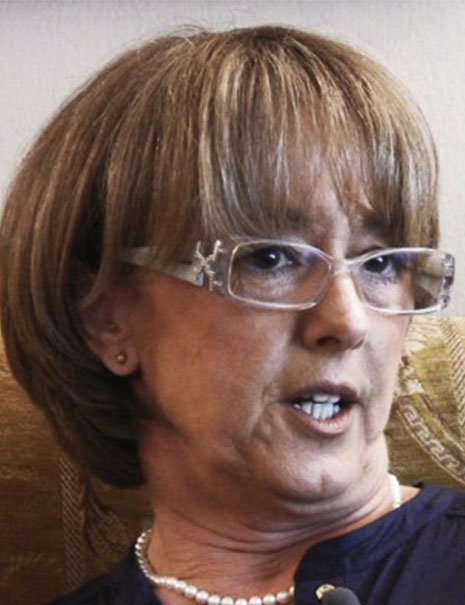 The widow of Josip Reihl-Kir, the tragically perished Croatian first chief of Police in Osijek, who was at the time also in charge of Police stations in nearby towns in Slavonia.

Current mayor of the town of Vukovar, Croatia.

Sabo talks about the circumstances in 1991 which lead to the destruction of Vukovar which lies in the Slavnonian region of Croatia.

Current mayor of the town of Vukovar, Croatia - Sabo talks about the circumstances in 1991 which lead to...Read More

Quickly after he started working in the Croatian daily “Vjesnik”, he was sent to cover events in Vukovar and Gospic. Powerful impressions from the war and testimonies by fragments of stories, behind which backstage political games were hidden, essentially influenced on his decision to take up research journalism. Today his research interests are directed at activities such as weapons and drug trade, prostitution, war crimes, political murders, abuse of secret services, etc.

Croatian journalist - Quickly after he started working in the Croatian daily “Vjesnik”, he was sent to cover events in Vukovar and Gospic.Read More

He is an advocate against liberal democracy and is the author of “Croatian book of survival: Study of statehood.”

Former Croatian presidential candidate - He is an advocate against liberal democracy and is the author of “Croatian book of survival: Study of statehood.”Read More

He is a Member of the European Academy of Arts and Sciences and has received the Golden Order of Freedom of the Republic of Slovenia. Mencinger was also Member of the Slovenian State Council for 5 years.

He previously worked for “Radio Student” and has appeared on many talk-shows discussing political and economic topics in the former Yugoslavia.

Widow of Croat fighter Milan Levar, who was assassinated in front of his house for investigating crimes against Serbs in Gospic, Croatia.

Father of Srdjan Aleksic, who noticed that the Serbian police in Trebinje, Herzegovina, was taking away a man for being a Muslim and acted against them, which resulted in tragedy. 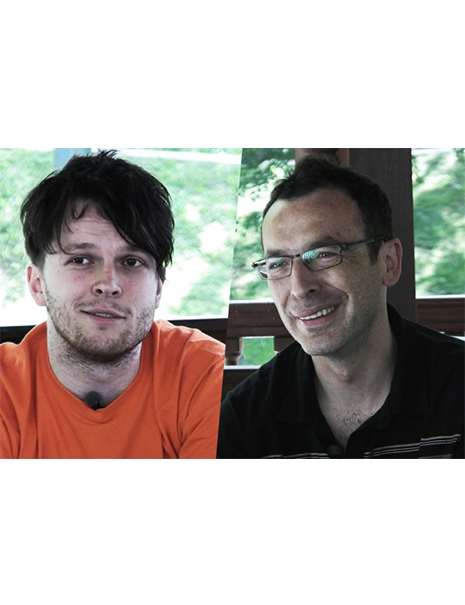 Members of the “Dubioza Kolektiv” band, currently based in Sarajevo, originating from Zenica, Bosnia and Herzegovina.

Their music consists of various styles ranging from Reggae, Dub and Rock intermixed with political lyrics along with uplifting and melodic tendencies. 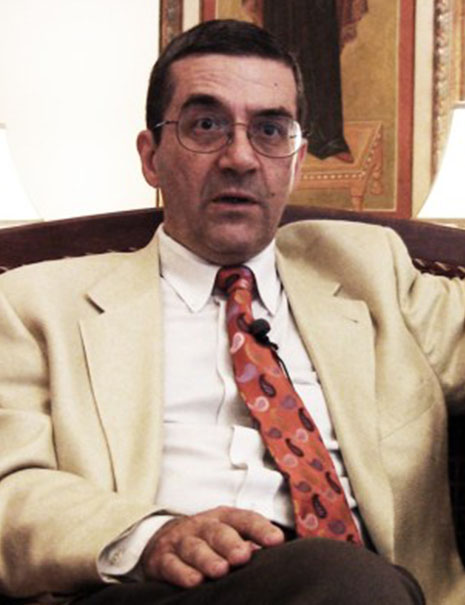 Serbian-American writer who was foreign-affairs editor for the paleoconservative magazine “Chronicles”.

He has a PhD in history from the University of Southampton. He was also director of the Center for International Affairs at the Rockford Institute. Trifkovic was also an unofficial spokesman for the Republika Srpska government in the 1990’s. Trifkovic is the author of Sword of the Prophet, a book on the history and doctrines of Islam. He comments on Balkan politics and is a regular columnist for several conservative publications in the United States.

Founder and President of “Fourth Yugoslavia”, the first mini-Yugoslavia in the Balkans, located in Subotica, Serbia.

Gabric argues that the Western world has taken away his “piece of heaven”, after which he decided to take drastic action by declaring his property of 15 acres as a mini-Yugoslavia.